Curious about that “blob” you see in the water?  Meet the bryozoans! 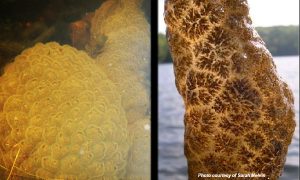 Bryozoans are tiny colonial invertebrate animals belonging to the phylum ‘bryozoa’, and are also known as “moss animals”.  There are 20 freshwater species worldwide.  A bryozoan colony, consisting of individuals called zooids, may resemble a brain-like gelatinous mass and be as big as a football, and can usually be found in shallow, protected areas of lakes, ponds, streams and rivers, and is often attached to things like a mooring line, a stick, or a dock post, etc.

Bryozoans are simultaneous hermaphrodites, with individual zooids functioning first as males and then as females.  Colonies contain zooids in both male and female stages.  Sperm from male zooids exit into the water through pores in the tips of some of the tentacles, and then are captured by the feeding currents of egg-producing female zooids.

Bryozoans are usually an indicator of good water quality, and should not be disturbed or removed from the water.

The Mission of the Lake Stewards of Maine (LSM) is to help protect Maine lakes through widespread citizen participation in the gathering and dissemination of credible scientific information pertaining to lake health. LSM trains, certifies and provides technical support to hundreds of volunteers who monitor a wide range of indicators of water quality, assess watershed health and function, and screen lakes for invasive aquatic plants and animals. In addition to being the primary source of lake data in the State of Maine, LSM volunteers benefit their local lakes by playing key stewardship and leadership roles in their communities.

LSM is a non-profit 501(c)(3) organization committed to the collection of information pertaining to lake water quality. For 40 years, trained volunteers throughout Maine have donated their time so that we may all learn more about one of Maine’s most beautiful and important resources — our lakes.